Hi,
Hopefully some people still frequent this forum, and hopefully somebody among them speaks Greek!
I found this verse in an old autograph album and I'd really like to know what it says. I was going to have a go at it with a dictionary but I'm finding it really hard to read the handwriting. So maybe someone can help me out? 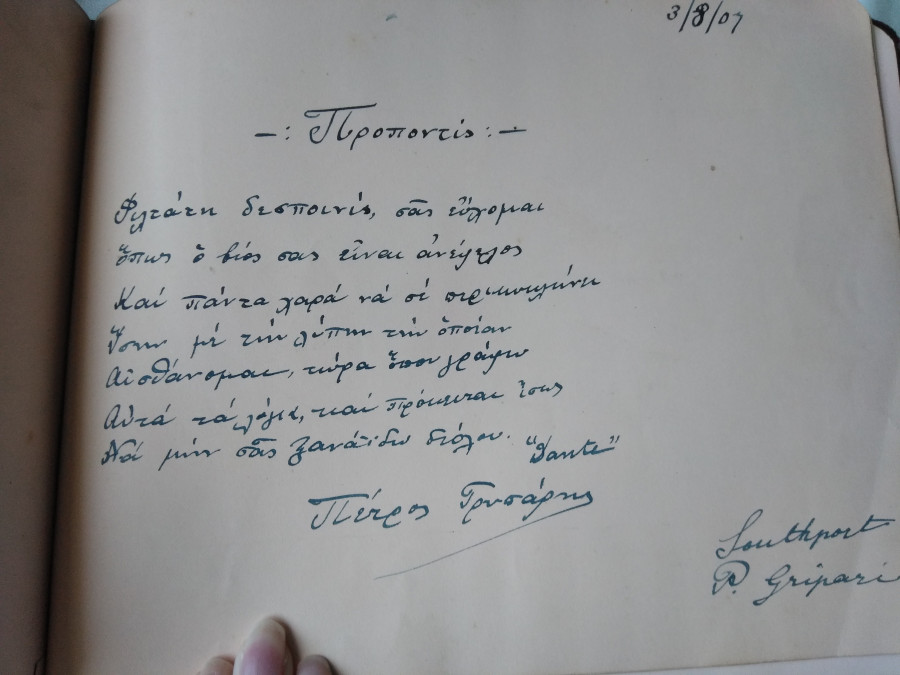 I tried Google translate for this:

Is this correct? And is there a way I can shorten it? It's meant to sound poetic, if slightly ironic when taken in context.

I've done a fair bit of research on Cuban Spanish/local slang/colloquial sayings/etc. and I'm trying to find a phrase that has the same or similar meaning as "Better safe than sorry." Right now, I'm going with "Más vale prevenir que lamentar, acere," but I don't know if that's accurate or if there's a better way of phrasing it. The character being spoken to is a Havana native while the character doing the speaking is American-born but of Cuban descent, and not that fluent in Spanish, if that makes sense.

Also is there a colloquial way of saying something like "claro que si"?

I'll probably be crossposting this in little_details too.

What is the word for 'Ma'am' in Japanese? Something you would use to refer to not only an older woman, but one who is in a place of power and respect (like a ship's captain or head of some big corporation).


ETA: This person is not, actually, a military commander *or* a CEO. This person is the head of a militant organization, 'freedom fighters', as it were, and if she had a title of any kind, it would be 'Director'. But I just want the equivalent of 'Ma'am', thank you.

Is "Shkval" the Russian word for "Squall"? Thanks in advance.

Hi guys!
Quick question here : one of my characters, a little boy, is addressing his father and begging him not to punish him. My Russian translation is :
Отец, упрашиваю вас!
(atiets, uprachivayu vas (rough phonetic translation. Sorry, I have no idea how to phonetically translate Russian to English, usually I do it with French)
Meaning : Father, I beg you!
Is my translation ok?
Thanks a lot :)
Hi! I found this community after frequently consulting little-details. I would greatly appreciate help translating this sentence into Russian:

"There's something in the road!"

The setting is modern-day and the character speaking is around 18, a native Russian speaker, who has always traveled a lot and wouldn't have any specifically regional dialect. She's in a car at night and is trying to alert the driver (her elder brother).

Latin transliteration would be appreciated. I can read Cyrillic decently but would prefer the Latin for ease of reading.

Hi all! I was referred over here by the good people of little_details.

I'm writing a story set in the Llyn Peninsula, a predominantly Welsh-speaking area and my main character who grew up elsewhere is returning to his grandmother's house after her death. He has just run into an old friend of his grandmothers who speaks to him in Cymraeg. I'm currently trying to work out how to say the following phrases, or what their Welsh equivalent might be.

These are a lot compared to the 'few phrases' specified in the rules, but I hope this is not excessive!

3. So, you didn't forget us while you were in Australia.

4. Will you be staying? (As in moving back to the Llyn)

6. We have some matters to discuss.

Any help would be hugely appreciated!

Is there anyone here by any chance who could help me with a translation into Russian? I need the following sentence:

I am not really into that sort if movie, but then, I am not an immature boy trapped in a grown man's body.

The speaker is from Georgia, if that makes a difference, and is talking to a friend and the insult is supposed to be friendly.

So, my character is in beginner's Hapkido. I've found a page that gives me a glossary of basic terms. What I'm not clear on is whether "Kyong-yea" (bow) is the noun or the verb? In other words, would the instructor say "This is the proper way to execute a kyong-yea or bow..." or is that term just used to give the order to bow?